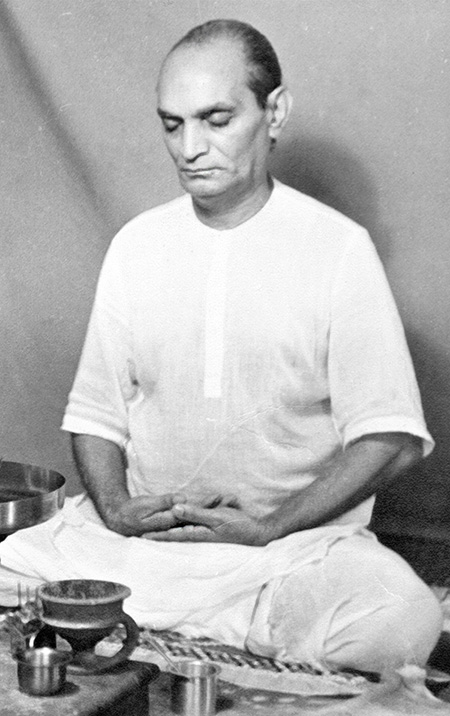 The Benefits of Anushthan

An anushthan is an intense spiritual practice that lasts a certain number of days and involves completing a specific number of mantras or austerities. During anushthan, ideally we keep silence, eat simple sattvic meals, and remain in seclusion, close to our asan, not interacting with the world. While in anushthan, we don’t cut our nails or hair, or disturb the environment around us any more than is necessary to maintain cleanliness. In this way, the spiritual energy builds both inside and around us.

This energy is so profound that all of our actions are magnified in their impact, so it is crucial to practice ahimsa, non-violence in thought and deed, during anushthan. Guruji taught that daily practice is essential, and doing anushthans deepens and accelerates our spiritual growth by heightening and intensifying the activity of the kundalini energy within.

Anushthan in our lineage

From stories Guruji shared we know that anushthan is practiced by many enlightened gurus, such as Maunibava, Jivandasji, and Upasani Baba. Guruji himself was given anushthans by several powerful teachers in his life and he continued to do anushthans as an important aspect of his quest for self-realization— even performing a year-long anushthan of a mantra asking Lord Ram for his grace.

Guruji said that some anushthans promise the gift of liberation while others bring the perfection of a mantra, meaning that the spiritual aspirant gains the power of the mantra. He took these guarantees literally, rather than as only symbolic. Guruji described a feeling of ecstasy after completing anushthans and he shared that, early on, completing a particular anushthan gave him a certainty that he was finally making spiritual progress.

Even after Guruji attained self-realization, he continued to do anushthans. He taught that they can not only bring liberation from the cycle of birth and death but also may be used for worldly or humanitarian goals. For example, he performed anushthans to bring relief from drought and to heal the land in a place near his ashram that was the site of intense violence, and he was part of a group of yogis who joined together in the Himalayas to do a three-month long anushthan of the Ram Raksha Stotram with the sankalpa (intent) to bring World War II to an end.

What are the benefits of anushthan?

Firstly, anushthan ignites an internal spiritual fire that burns away our samskaras— the mental attitudes and habits we acquire over many lifetimes— cleansing and purifying us. Secondly, as our minds and bodies are transformed, we are able to hold and make greater use of this increased energy. As Anandi Ma says in This House is on Fire, “Just as a house must be wired properly for electricity, so must the body be wired appropriately to handle the flow of shakti moving through the nervous system without overloading its circuits.” Thirdly, because of this purification process and our capacity to hold more intense energy, we become able to receive divine revelation.

Anandi Ma and Dileepji have given us beautiful examples of divine revelations they experienced during anushthan. Ma once shared that on the last day of her anushthan before meeting Dhyanyogi, she had a vision of dazzling light “like the light of a thousand suns.” She also saw a vision of the Divine Mother and merged with Her. Once when Dileepji was doing an anushthan in the Bandhwad ashram cave, sitting next to Dhyanyogi. He describes, “I heard a loud sound from where Guruji was sitting. I opened my eyes and saw that Guruji had completely changed into the form of Lord Hanuman. He remained this way for a little while, and then changed back.”

Disciples have described seeing different forms of the Lord, experiencing glimpses of the formless state, and having ecstatic experiences of Oneness.

As seen in Dhyanyogiji’s examples above, a tremendous benefit of doing anushthan may be the fulfillment of our sankalpa. At the beginning of an anushthan, it is typical to perform a sankalpa— a statement of intention dedicating the practices. We might dedicate our anushthan to the healing of a particular person or groups of people, or for world peace, or for our own spiritual growth.

To read more about anusthan, see Dileepji’s article Anushthan: A Powerful Opportunity for Spiritual Progress. The article also includes Dhyanyoga Centers guidelines for how to perform an anushthan.